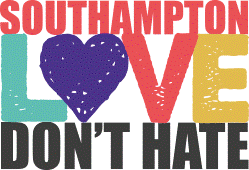 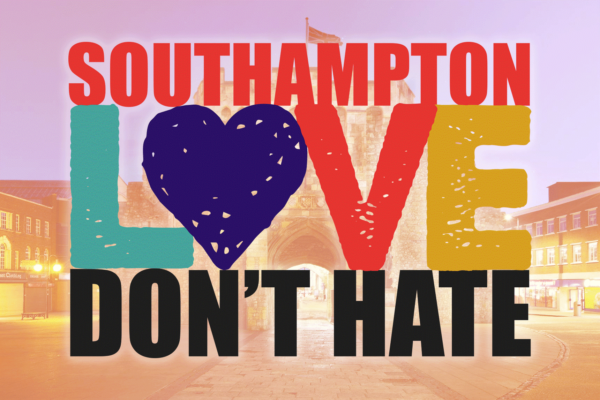 Recent statistics reveal that Southampton is the second worst city in the UK for hate crime. Almost 600 incidents of hate crime were reported in 2016/7 – a 30 percent increase on the previous year – but community organisations including those already backing Love Don’t Hate, suggest the number of offences may even be much higher.

The organisations, which include Muslim Women’s Network and Southampton Voluntary Services, and represent all sections of Southampton society, launched Love Don’t Hate with the aim of raising awareness, promoting the reporting process, and, ultimately, encouraging people and other local organisations and businesses in the city to adopt a zero-tolerance policy on hate crime.

Ian Loynes, Chief Executive of SPECTRUM, said: “It is unacceptable that in a city like Southampton, people are being allowed to get away with treating others unfairly and maliciously because of their differences. We want both those personally affected by hate crime and those witnessing them as they occur to speak out.”

To make the reporting process easier, the community wide partnership has created a network of 18 reporting centres across Southampton, where victims can access support. A new smartphone app, Southampton Love Don’t Hate, has also been developed as part of the Love Don’t Hate campaign to promote online reporting.

Ian added: “Everyone in Southampton should feel confident and sufficiently empowered to recognise and report incidents of hate crime, yet we know from statistics and first-hand experience this is very often not the case.

“We cannot tackle crimes that are not reported, and so addressing under-reporting in the first instance is crucial to our broader aim of reducing these incidents and making Southampton a better and safer city, with zero tolerance of this behaviour.”

To download the app, and learn more about hate crime in Southampton and what you can do to help, visit Android or Apple AppStores and search for ‘Southampton Hate Crime’

There are currently 18 3rd Party Hate Crime Reporting Centres in Southampton, all working under a common brand which has been adopted across Southampton and Hampshire:

In 2017, 83% of people taken to court by the Crown Prosecution Service for hate crime either admitted the offence or were found guilty by a jury or judge.

The highest share of the city’s reported hate crime took place in the Bargate ward (29%). This is fuelled by the night time economy.

Portswood is the ward with the largest increase in hate crime. Hate crime reporting doubled from 2015 to 2016.

Millbrook is the ward with the highest proportion of disability hate crime.

SPECTRUM Centre for Independent Living is a membership based organisation run and controlled by Disabled People. Based in Southampton, our aim is to ensure all Disabled People have a voice and to actively participate in all spheres of society, free of discrimination and lead an independent lifestyle of their choice.